In the beginning, the Earth was formless and empty.

Some time later, Kat and Colin met.  Let’s start our story there.

Colin and Kat met in early 2013 at the Vertical Endeavors rock climbing gym in St. Paul.  Kat had only recently moved to Minnesota, and had happened to meet some friends of Colin at a social event over the holidays.

Their first interaction was succinct but dripping with signs of future love.

And thus, love bloomed.  And to this day, when Colin calls Kat, her caller ID says “Colin Nine-Finger.”

Ok ok, in reality, it took a while longer and it was a lot more awkward.  For example, here’s an exchange between Colin and his friend Genghis. Genghis was riding in the car with Kat, Colin was in South Carolina.

Very quickly, friends and family on both sides of the equation began hearing an awful lot about “New Friend Colin” and “New Friend Kat.”

By the time Colin left for a trip to Vietnam, there was a near constant iMessage stream of bad jokes and puns bouncing back and forth.

It all came to a head on April 26th, 2014, in Florence, Italy.  In an extraordinarily suave and slick way, Colin proposed during a Tuscan sunset. Disclaimer: Colin wrote that. 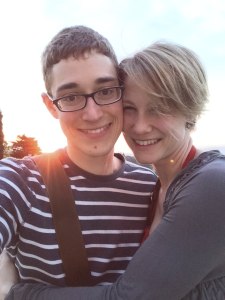